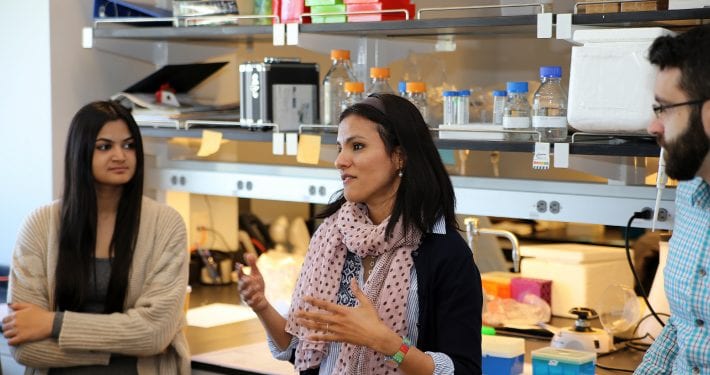 Prabodhika Mallikaratchy with student researchers in her lab
By LISA HIRSCHFIELD

A Lehman College laboratory led by Associate Chemistry Professor Prabodhika Mallikaratchy has received a $1.76 million award from the National Institutes of General Medical Sciences (NIGMS) to further its cutting-edge research on DNA nanotechnology.

As one of the National Institutes of Health, the NIGMS supports research that clarifies biological processes and lays the groundwork for advances in disease diagnosis, treatment, and prevention. Mallikaratchy and her team applied for its Outstanding Investigator Award, which helps talented researchers fund long-term projects, last spring and were recently notified that they won the grant.

Outstanding Investigator Awards are often given to faculty at major research universities. However, in being named a recipient, Mallikaratchy’s lab has shown that groundbreaking science can occur at a wide range of institutions. Indeed, the award, she said, “feels like a pat on the back from our colleagues.”

DNA nanotechnology, in which synthetic structures based on DNA are created and applied to a variety of biomedical and technological applications, has grown rapidly within the last several decades. Mallikaratchy and her team of CUNY doctoral students and Lehman undergraduates have focused on it since she came to the College and started her lab in 2012.

Much of their work revolves around creating molecular tools made from aptamers—small RNA- and DNA-shaped structures that can bind to specific target molecules, including those on the surfaces of viruses and live cells.

By 2016, the Mallikaratchy lab pioneered a now-patented biochemical-screening platform called ligand-guided selection (LIGS), which allows researchers to identify highly specific aptamers that can be engineered to attach to certain chemical receptors on a cell’s surface. Once attached, these aptamers can be used to manipulate the cell in different ways.

“On the whole cell you have billions of receptors, but if you were to say, ‘I want an aptamer against receptor X,’ the platform that we developed allows us to do that,” Mallikaratchy said.

One of their research goals, she added, is to better grasp the basic biology at work—to “understand what happens to these cells, what kinds of interactions take place?”

The LIGS platform is now available for licensing and promises to accelerate research in DNA nanotechnology as well as molecular biology and biochemistry.

“LIGS can be expanded to research different types of molecular interactions in cells,” Mallikaratchy said.

Using funds from the grant, Mallikaratchy also plans to broaden the technology to identify aptamers against a wide range of receptor molecules and use aptamers to engineer devices made from DNA.

Mallikaratchy noted that the NIGMS award will allow her to continue funding the doctoral and undergraduate students in her lab. Facilitating student research is a vital aspect of her work; she said her educational mission is to demonstrate—especially to Lehman undergraduates—that it is the quality of research that matters most, and not the size of the institution where it takes place.

“I want to show my students that if you work hard, the sky’s the limit for you,” she said.