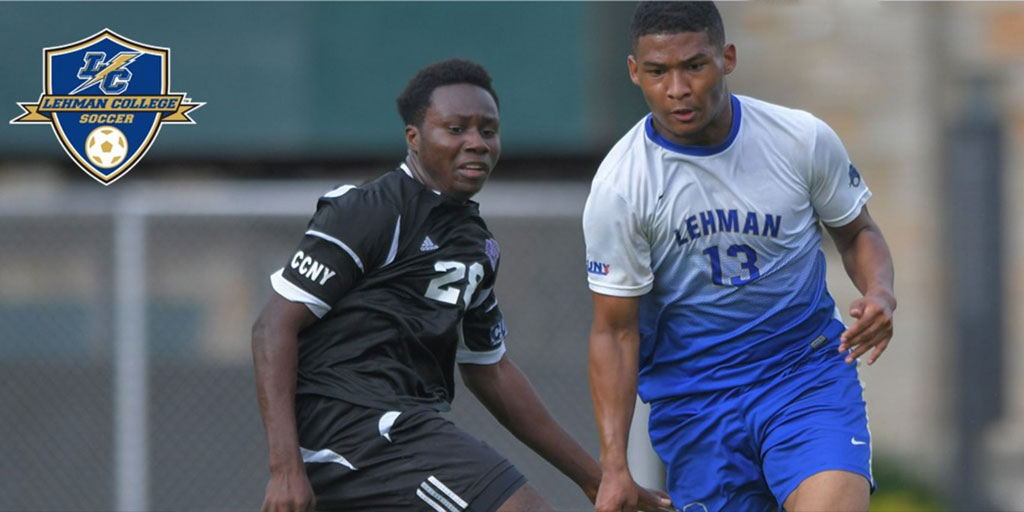 Island (CSI), that have played to identical 1-0 scores in their last three meetings—all won by the Lightning. For a while it seemed like that was predestined to happen again, but a pair of Salh Alzubidi markers lifted the Lighting to a 3-2 victory and into the CUNYAC final against John Jay on Saturday, November 4 at 2 p.m.

The Lightning started out a bit sluggish but Alzubidi, the conference’s leading scorer, put the defending champions on the board in the 13th minute with a gorgeous volley from the top of the box, off a feed from Essosa Aluyi. It was Alzubidi’s 16th marker of the season. The newcomer from New Rochelle reflected on the goal and his performance overall. “I had to pick it up. I was the only striker so I felt like I had to do it,” he said. “We should have won 3-0, but they’re a good team so we had to fight through.”

Lehman made the score 2-0 nearly ten minutes later. In the 23rd minute, Shevante Scott placed a beautiful pass from the left side into the box where Aluyi slipped it past the keeper. Lehman nearly went up 3-0 with 41 minutes to go but the Dolphins keeper stopped the penalty shot.

The save on the penalty kick swung the momentum into CSI’s favor and the team used that to get on the scoreboard just before halftime.

CSI pressed from the outset of the second half, pushing the ball forward and trying to create scoring chances. Their diligence paid off in the 58th minute, when they tied the game on a penalty kick.

The score stayed at 2-2 until Alzubidi struck again. The forward found the back of the net on the game-winner in the 83rd minute. Scott, who had an assist on the play, took the ball at the top of the box and slipped a nifty pass to Alzubidi on the right side. The junior calmly put the ball in the near side and put Lehman up 3-2 and they held on for the win.

The two markers allowed by the Lightning were the first two goals permitted by the team in conference contests this season. The victory was the fourth-straight over CSI and evened the all-time series at 13-13-1. Alzubidi totaled three goals against the Dolphins this season, scoring the only marker in the 1-0 win earlier this year at Staten Island.

Lehman head coach, Toma Gojcevic reflected on the victory and the season as a whole. “We put goals in place from day one,” he said. “I couldn't be happier for the team, the boys, the coaches, everybody involved has done a great job.” He went on to speak about the upcoming matchup with John Jay. “I can’t wait for the final. Because you never get tired of winning. We’re ready and we’re an experienced team. This was our goal from day one, to be there"

Prior to the game, Lehman was presented with the CUNACY regular-season champion trophy from the league. The Lightning face the Bloodhounds in the final on Saturday at 2 p.m. at CSI.