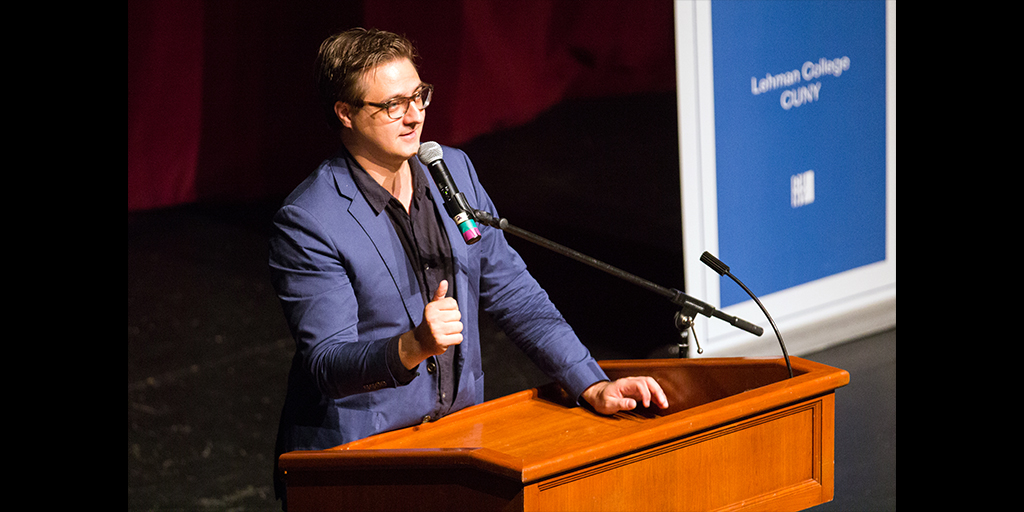 The Bronx community gave a warm welcome to one of its own at Lehman College’s Lovinger Theatre on Sunday night. Chris Hayes of MSNBC’s “All In With Chris Hayes,” who was born in the Norwood section of the Bronx and grew up in Riverdale, returned to discuss his latest book, A Colony in a Nation. He invited fellow Bronxite and Lit Bar entrepreneur Nöelle Santos along to help him sell some books.

“I was overjoyed when I heard that Chris wanted me to be part of this event,” said Santos while processing sales of the book. It seemed that many waiting on the long line to make their purchase had heard of the young woman from the Bronx determined to open a bookstore.

Santos chatted amiably with guests, answering questions about when and where the store would open—by the end of the year and somewhere in the South Bronx. The Lehman alumna says that support for her bookstore has been overwhelming and encouraging.

“People feel that I’m representing them,” explained Santos. “The Lit Bar is for the Bronx and by the Bronx. I was tired of complaining about what we don’t see here. I wanted to do something about that.” Indeed, if the closing of the borough’s only Barnes & Noble’s store felt like another disinvestment in the people of the Bronx, then the Lit Bar represents a reinvestment.

While Santos sold books at the front of the theater, Hayes sat at table set up on the stage, signing books while talking with attendees and posing for the occasional selfie. There was a genial mood in the air—not at all reflective of the sobering discussion on the state of race and policing in America that had just taken place.

During his talk, Hayes reflected on his experiences growing up in the late eighties and early nineties in New York and the way that crime shaped the politics of the city then and now. A Colony in a Nation paints a picture of two Americas with disparate policing strategies at play: in the Nation, citizens experience a free society, where “lite-touch” policing is the norm; in the colony, policing is a disruptive force to the functions and activities of daily life.

Sitting in the audience and nodding his head in agreement was Jim Gilbert of Teaneck, NJ. A fan of Hayes, Gilbert said he had read the book and that he wrote his own dissertation on concepts of racism. Gilbert, who is 80, worked in the Bronx for 45 years as a social worker.

The topic resonated deeply also with Suzette Ramsundar, associate director of Campus Life and director of the Herbert H. Lehman Center for Student Leadership Development. “For me this is a very timely discussion,” says Ramsundar. “Over the past year, my staff and I have worked to bring workshops and guest lecturers to our campus that will engage students in a dialogue about the way they experience race and policing in their communities.”

This event was sponsored by Lehman College, in partnership with Dream Yard, the University Neighborhood Housing Program, and the Herbert H. Lehman Center for Student Leadership Development.