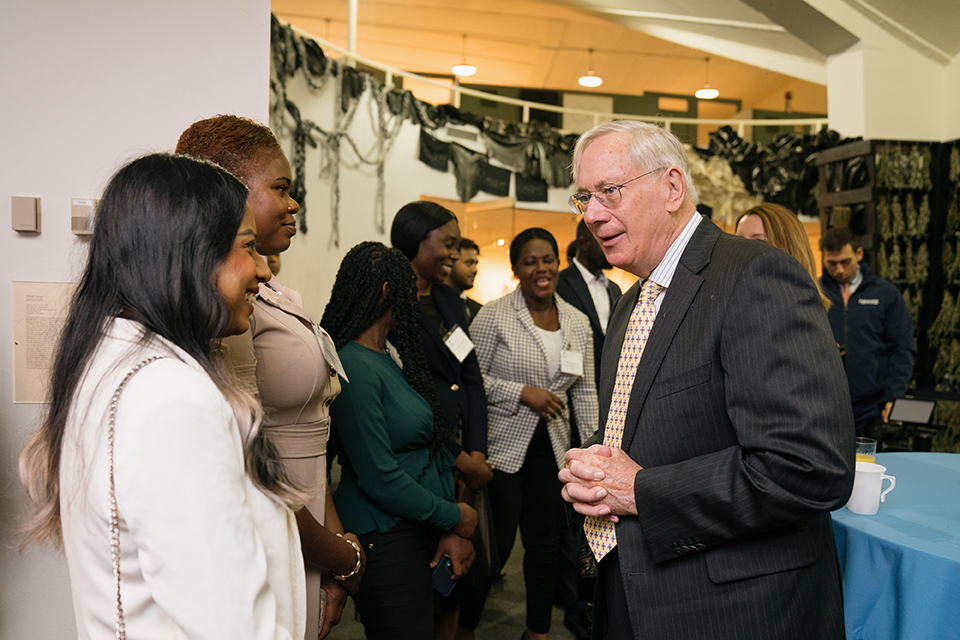 The Duke of Gloucester spoke with SGSNY Scholars at the Lehman College Art Gallery. Photo by Brian Hatton.
By LISA HIRSCHFIELD

His Royal Highness The Duke of Gloucester visited Lehman College on Monday, October 25,  welcomed by CUNY chancellor Félix V. Matos Rodríguez and Lehman president Fernando Delgado, who both thanked him for his patronage of the St. George’s Society of New York (SGSNY) and support of the scholarships it provides to students at Lehman and other CUNY colleges.

The Duke had an opportunity to speak with some of this year's SGSNY Scholars at Lehman—14 in total—and was presented with the College’s highest honor in recognition of his sponsorship and charitable work on behalf of the Society.

“It was a great privilege today to award the Lehman College Presidential Medal of Honor to His Royal Highness The Duke of Gloucester for his support of our students and our institution through the St. George’s Society of New York,” President Delgado said.

SGSNY was founded in 1770 with a mission to help British immigrants in New York. It now provides assistance to those who trace their heritage to Britain or one of the 56 Commonwealth nations—including Jamaica, Ghana, Nigeria and Trinidad.

Lehman’s relationship with the organization originated in 2008; the partnership has since generated more than $1.2 million in scholarships to Lehman College seniors needing financial support to complete their degrees. Nearly 350 students—primarily first-generation students of color—have received the prestigious scholarships to date.

“The importance of helping our students remove financial barriers so they can finish their collegiate careers cannot be overstated,” said the Chancellor. “We thank His Royal Highness and the St. George’s Society of New York for enabling our students to achieve their academic goals and fulfill their educational dreams.”

In addition to financial support, SGSNY Scholars benefit from enrichment opportunities that include an alumni network, quarterly professional development workshops, and a mentoring program that pairs students with members and partners who give personal and professional guidance.

“The strong partnership between Lehman College and the Society has been key to the success of so many students—not only recognizing their academic excellence, and serving as a lifeline as they complete their degrees, but also giving them a leg up as move into the next phase of their lives." 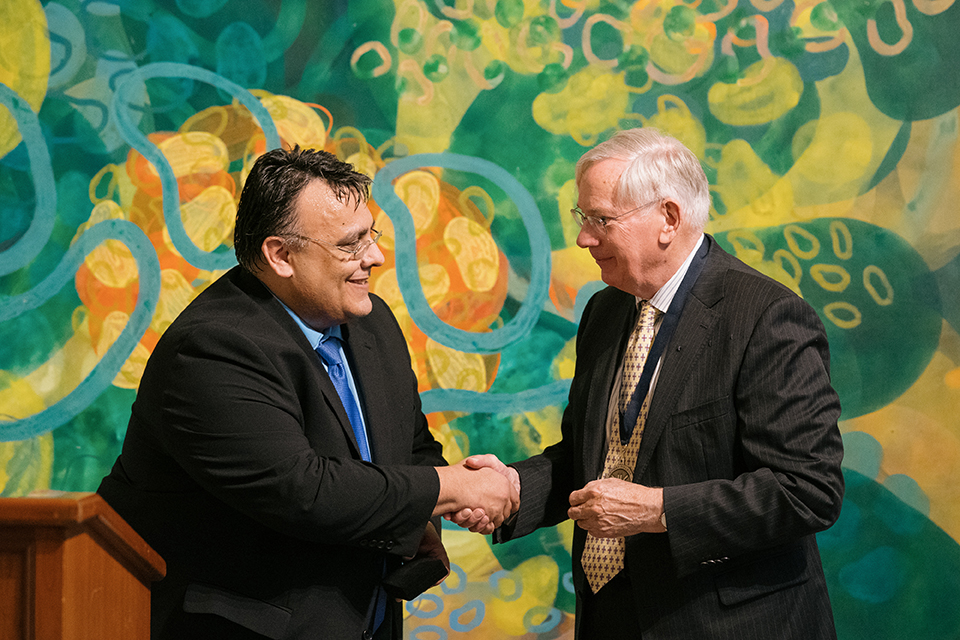 After a morning reception at the Lehman Art Gallery, the Duke, a trained architect, toured the campus and Lehman’s new Nursing Education, Research, and Practice Center, currently under construction. Over 30 percent of SGSNY scholars are nursing and human services majors.

“St. George’s Society of New York is proud of our partnership with Lehman College and being part of the CUNY family that makes such a difference in the life of students, their communities, and the city we call home,” said Clare Risman, Executive Director of SGSNY. “We look to supporting even more students to reach their full potential.”

“I am gratified that what began at Lehman College 14 years ago has now grown to support students of Commonwealth heritage at CUNY institutions across every borough of New York City,” said President Delgado.