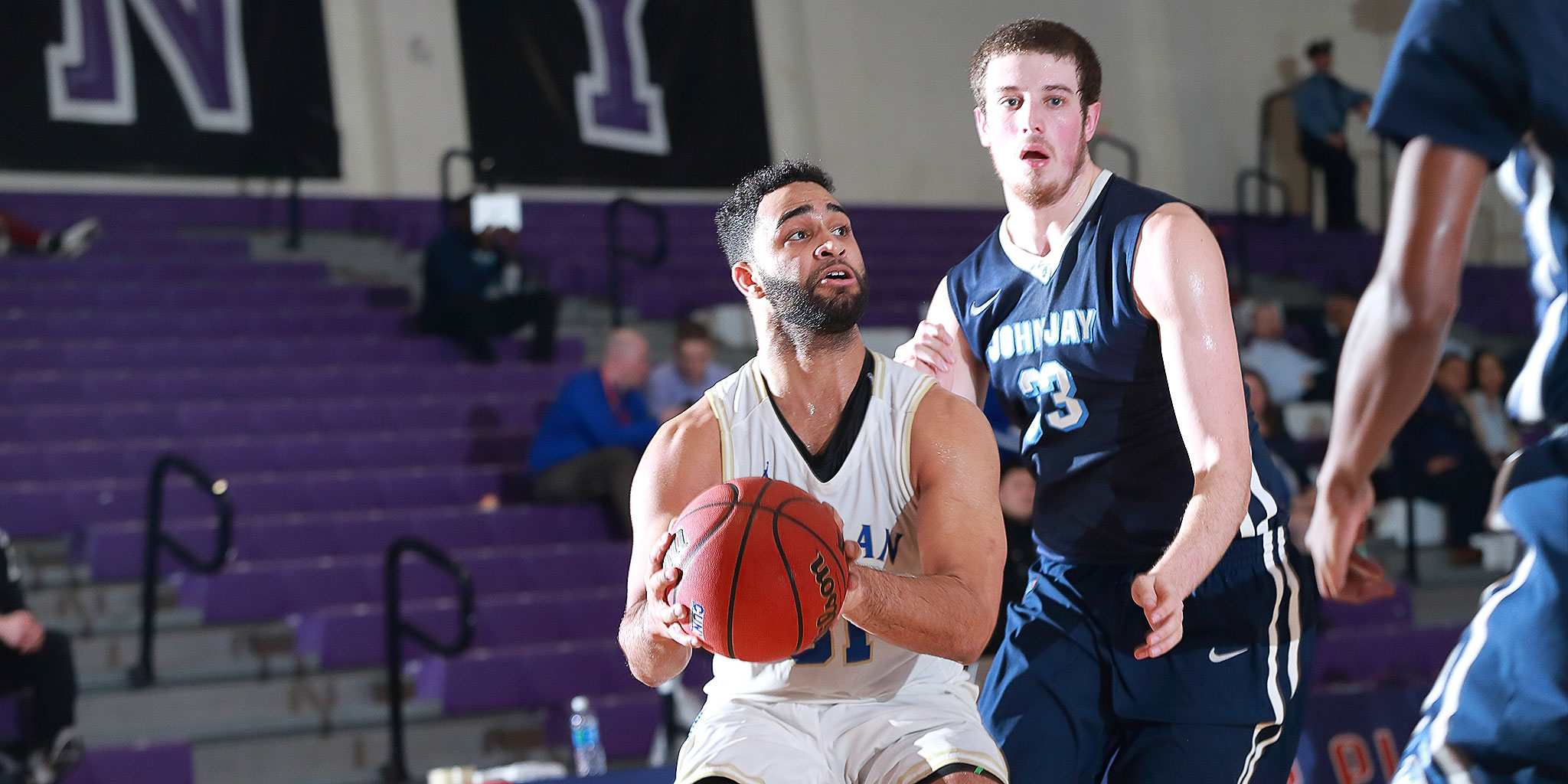 Despite being the top seed in the CUNYAC championship, the Lehman College men’s basketball team lost to No. 3 seed and defending CUNYAC champs, College of Staten Island 77-75, in a game played at City College on Friday night. The loss ends the team’s 14-game winning streak and drops their record to 22-5 overall.

Lehman prevailed in their two regular-season contests against CSI, winning by six in overtime on Staten Island and setting down the Dolphins by one point at home later in the year. This time, the Lightning trailed by as many as 12, their biggest deficit of the season, but fought back to tie the game three different times in the closing minutes before finally succumbing to CSI.

Lehman jumped out to a 5-2 lead as Mylo Mitchell and Clinton Akalonu recorded block shots early. The Akalonu rejection led to a layup from Luis Hernandez and a three-pointer from Andrew Utate made the score 5-2. From there, CSI took control and used a 17-7 run to build a 19-12 lead. At the 9:02 mark, Tevon Bennet came off the bench and gave the Lightning a jolt. The guard scored a quick bucket and grabbed a rebound when Lehman was getting killed on the glass.

Down 27-18 with 8:27 left, the Lightning used a 7-0 run to get within two points.  Hernandez opened the scoring spree with a jumper. After the Bennet layup, Hernandez made a three to make the score 27-25. CSI pulled ahead from there and led at the half, 39-28. The 11-point, halftime deficit was the largest of the season for the Lightning.

Lehman opened the second half with a 7-0 run to pull within four, at 39-35. Utate made a foul shot just 0:09 into action. Jean Marcial followed with a three-point-play. Utate capped the run with a three-pointer at 17:58. From there, the Dolphins responded with a seven-point surge of their own and got the lead back to 11 points, at 48-37, with 16:27 on the clock. Half a minute later, CSI led by 51-39 when First Team CUNYAC All-Star, Utate pulled the Lightning within 51-48 by hitting three-pointers on three consecutive possessions. Utate was 6-8 from behind the three-point line in the game. Still trailing by three points with 14:31 remaining, Lehman committed five straight fouls before making a basket.

CSI eventually got the lead up to 12-points three different times, the final time at 7:33.  Down 67-55, Mitchell sank a free throw to make the score 67-56. A minute and a half later, Mitchell made his only three of the game and Lehman trailed 67-59. Hernandez followed with a three-point play and made the score 69-62. Hernandez stole the ensuing possession and scored a layup making the score 69-64 with 4:44 left. Two more foul shots from Hernandez made the score 69-66. After an Akalonu foul shot pulled Lehman within two, a Marcial steal and layup tied the score at 69-all with 3:46 left.

CSI scored the next five points to go ahead, 74-69. Utate kept the Lightning close with a three-pointer inside of a minute. Down 74-72, Lehman tried to steal the inbounds pass, but was forced to foul. The Dolphins converted both and lead 76-72 with 0:13 left. Mitchell took the inbounds pass and dribbled all the way in for a layup and foul. He missed the foul shot and Lehman trailed, 76-74. Hernandez ended up on the line with 0:02 left and Lehman down two. He made the first foul shot and but missed the second.  The Lightning foul and CSI made one of two shots and hung on for the 77-75 victory.

In the game, Hernandez shot 10-19 for a game-high 29 points and 10 rebounds. Utate added 24 points. The team shot 14-29 from the foul line (48.3%), the lowest percentage of the year. The Lightning got out rebounded 50-37; the largest margin of difference this season. The Lightning were 2-1 on the year against the Dolphins and all three games were decided by a total of nine points.

The team ended the 2017-18 season as CUNYAC regular-season champions, a 22-5 season (which was the best under Coach Schulman) and a 14-game winning streak during the year.