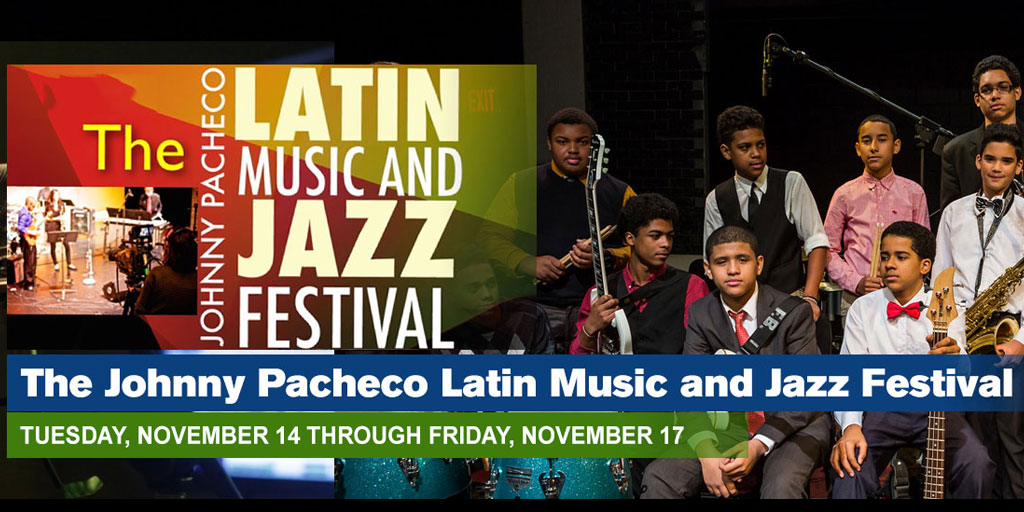 Lehman College is presenting the Ninth Annual Johnny Pacheco Latin Music and Jazz Festival on Tuesday, November 14 through Friday, November 17. This year’s festival, which takes place in the Studio Theatre in the Speech and Theater Building on the Lehman campus, will include performances by New York City-area professional and student ensembles, workshops for musicians, and a jazz musical. The event, which is open to the public and free of charge, will be simulcast on BronxNet television and streamed live. Onsite festival seating is provided on a first-come, first-served basis.

The Johnny Pacheco Latin Music and Jazz Festival, named for the legendary musical superstar who led the salsa music and dance explosion in the 1960s, provides bandstand and learning opportunities for more than 250 talented young musicians studying music in New York City schools. The entire festival is being promoted as part of the Jazz Education Network Virtual Outreach Series to help foster interest in “the improviser’s art” around the world.

Additionally, the 2017 Pacheco Festival is serving as a fundraiser to provide disaster relief for the people of Puerto Rico. Online donations can be made at lehman.edu/givetojazz.

“Each year, this festival brings together more and more musical artists, students, and community members in a celebration of the Latin musical genres that are now part of a global soundtrack,” said Allan Molnar, a music lecturer at Lehman College and the festival’s producer and artistic director. “Many renowned musical icons, like Johnny Pacheco, have lived and worked in the Bronx, so presenting this gathering here at Lehman makes total sense. The impact of this event is easy to appreciate when you realize that some of our first students are now professional musicians. I’m pleased to know that we have become part of the rich cultural life here in the Bronx.”

On Tuesday, November 14, there will be two featured performances of Holding the Torch for Liberty, a jazz musical by Eli Yamin and Clifford Carlson, about the fight for women’s suffrage. The shows are at 1 p.m. and 7 p.m. and will feature students from the Celia Cruz Bronx High School of Music.

On Wednesday through Friday, November 15-17 at 10 a.m. to 4 p.m., there will be workshops and performances by various student jazz and Latin jazz ensembles.