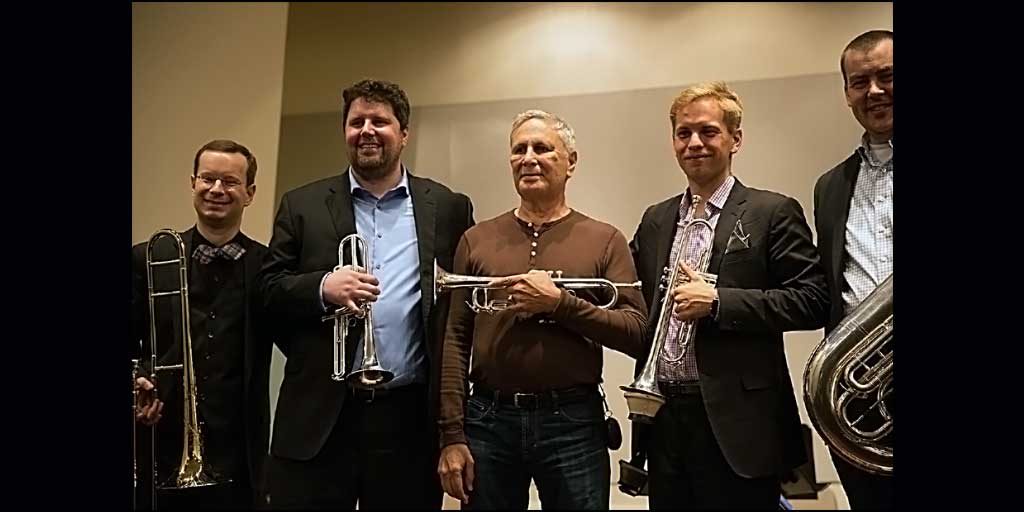 For classical music ensembles performing contemporary works, it is quite an honor to have in the audience the composer of a piece that is on the program. To the delight of both musicians and attendees, this was the case recently when the Gaudete Brass Quintet performed at Lehman College for an afternoon recital and Distinguished Professor John Corigliano joined several of his Music Department colleagues in the audience.

The Gaudete Brass Quintet, a Chicago-based ensemble founded in 2004, has long been a champion of Corigliano’s music, even participating in a celebratory 75th birthday concert in honor of the composer, a few years back. Earlier this year, the ensemble released its fourth album, Sevenfive: The John Corigliano Effect, based on the program of the preceding birthday gathering, and it includes three Corigliano compositions and others penned by six of his former students. The album was well-received, and it even garnered three nominations in the first round of Grammy Award voting—for Best, Chamber Music / Small Ensemble Performance, Best Contemporary Classical Composition, and Producer of the Year, Classical.

At Lehman, the Gaudete (pronounced “GOW-day-tay”—it is a form of the Latin word for “joy”) Quintet performed four pieces from Sevenfive, including Corigliano’s Gazebo Dances, originally a four-hand piano composition and now in an arrangement by Cliff Colnot for brass quintet, plus works by aforementioned students Jeremy Howard Beck, Jonathan Newman and David Sampson. Rounding out the program was the four-movement Canciones y Villanescas Espirituales by 16th century Spanish composer Francisco Guerrero. The music revealed all of the tonal colors of a brass ensemble, moving from quieter passages with gorgeous harmonies and long expressions to more modern, jazzier juxtapositions of timbre and tempos.

The five Gaudete brass musicians—trumpeters Bill Baxtresser and Charles Russell Roberts; horn player Phil Kassel; trombone player Paul Von Hoff; and tuba player Scott Tegge—were kept busy on their recent trip to New York; in addition to their Lehman performance, the quintet was featured on a WQXR live webcast hosted by Bob Sherman and played a concert at Spectrum in Brooklyn. Undoubtedly, though, one of the highlights on this “mini-tour” was having Professor Corigliano greet the members of the ensemble after their performance at Lehman.