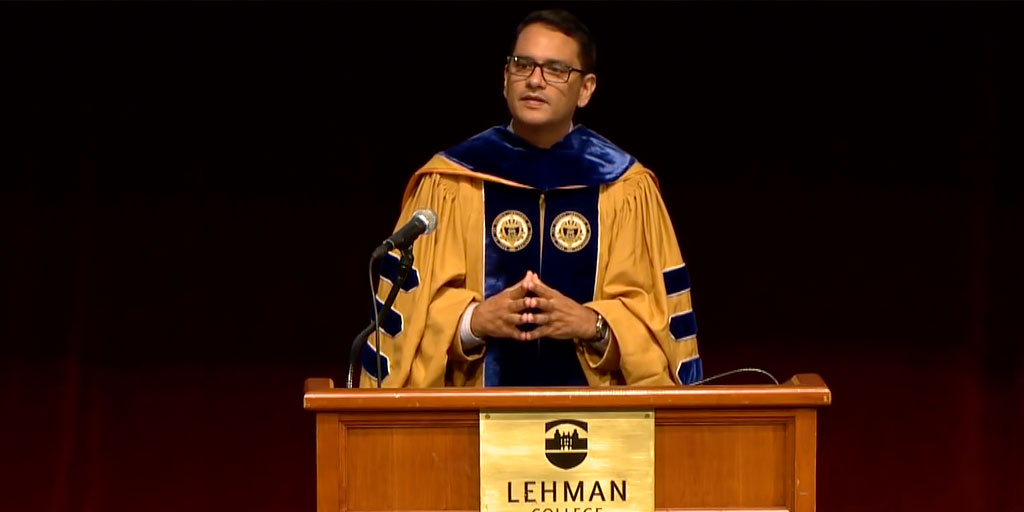 New Lehman President José Luis Cruz delivered a historic convocation address to the campus community, outlining an optimistic vision for the future. He began his speech by calling Lehman “the most important mission-critical senior college of the world’s premiere public urban university.” (Watch the video here.)

Cruz identified a six-point plan, his top priorities that will help to insure the school’s success in the coming years. “First we will work to clarify our vision and we will seek to solidify our identity as the nation’s ultimate urban serving institution,” he said.

He succinctly laid out the other five priorities and goals for the College: 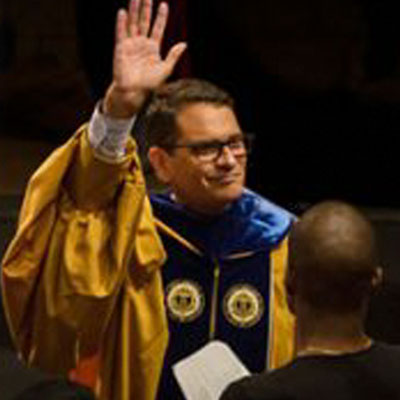 Cruz was greeted with several standing ovations during his introduction and he connected to the audience immediately with a personal anecdote from his childhood that demonstrated the importance of how a caring and supportive educator can change the course of a life.

He recalled the fear he felt as a first grader going to school in Central Florida because he did not understand or speak English. Two weeks into the fall term he remembers returning home and tearfully telling his mother that he would never go to school again.

His mother convinced him to go back to the school and tell the teacher that he was late because “he was sick in the morning.”

When he walked into the classroom, he blurted out “I was sick in the morning” but to his classmates it sounded like “I was a chicken in the morning.” The room erupted into laughter. His teacher comforted him and said in broken Spanish, “Yo ayudo tu—I’ll help you.”

“To this day, I am of the mind that my teacher’s sharp focus and open heart, helped shape the trajectory of my life,” he said.

Cruz emphasized that he wasn’t naïve about the tough road ahead and thanked the community for the often blunt and candid 62-pages of comments that were submitted through an online survey. The comments gave the president a snapshot of what faculty, students, staff, and alumni most admire about Lehman College and what needs to be improved.

“The Bronx is experiencing a renaissance, but you recognize that there is much to be done before we meet our full potential as agents for change and stewards of place,” he said.”

Gentian Muhaxheri, the President of Lehman’s Student Government Association, was pleased with the direction of Cruz’s speech and the openness he’s shown to meet with students since starting his tenure. “He started off with a story about himself that was touching, and one that a majority of us at Lehman who are immigrants and speak English as a second language can relate to,” he said. “To see someone like that become the president of a senior college in New York City should be inspirational to every Lehman student.”

The new president closed his address reminding the audience that the role of the College is to transform the lives of students who have not been given equal opportunities to achieve their goals.

“We will inspire others to take intentional action to better serve the millions of students who are coming of age in America today, but who because of the color of their skin, the balance of their checking account, their place of origin, or the tenets of their faith—to date, have not been afforded the opportunities they need to meet their full potential,” he said.