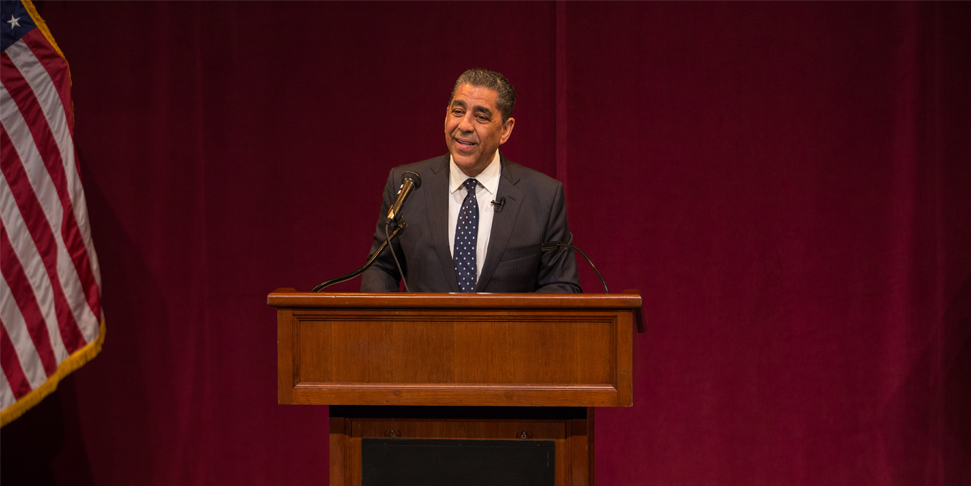 Congressman Adriano Espaillat delivered a compelling speech at the 48th annual Herbert H. Lehman Memorial Lecture, giving assurances that he would fight to preserve an “American Dream” that allowed him to immigrate from the Dominican Republic.

“It is because of this American Dream that I now sit as a member of the U.S. Congress,” he said in a speech called “Fighting for the America that I Know!”

There is probably no current American politician who understands the challenges facing immigrants more than Espaillat. In 2016, he became the first Dominican-American elected to serve in the United States Congress. He came to this country at age nine in 1964, and was once an undocumented immigrant.

“Congressman Espaillat has direct, empathetic understanding of what it is like to be in this country today under threat of deportation,” said Dr. José Luis Cruz, President of Lehman College, in his opening remarks, introducing the Congressman, “an understanding of escaping violence or poverty—or both—experienced in a homeland.”

Espaillat denounced Thursday’s Congressional repeal of Obamacare as a “tough and deeply” contested vote and urged New York to remain steadfast as a sanctuary city and safety net that “must continue to protect the most vulnerable among us.”

He described his journey to the U.S. as “deeply and truly an American story” and criticized President Trump for setting a “negative tone” and a “tone of intolerance.” He discussed the challenges facing the nation on a range of issues from student debt to foreign affairs and he applauded the federal court decisions to block Trump’s travel bans.

“This establishes that our nation is still healthy; you cannot govern as an emperor in isolation,” he said.

He told the audience at Lehman that a proposed piece of legislation would require ICE officials to wear body cameras both for the protection of immigrants and for themselves.

Last month Espaillat told City & State magazine that we need to “make sure we resist all of Trump’s negative, draconian initiatives, especially his executive orders, that stand in opposition to who we are as Americans.

Espaillat’s story mirrors that of many of his Bronx constituents and Lehman students, who as DREAMers came to the U.S. with their families as children and may be at risk now for deportation.

More than 50 percent of Lehman students are Hispanic and 55 percent reside in the Bronx; nearly 40 percent were born outside the United States.

Espaillat and his family initially came to the country on travel visas, overstayed their visit, and then returned to the Dominican Republic. They were ultimately issued green cards and came back to the U.S. He grew up in Washington Heights, where he became a well-known community advocate before entering politics.

His road to Washington went through Albany, where Espaillat served first in the New York State Assembly and then in the New York State Senate. In 1996, he became the first Dominican-American elected to the state legislature. He has been a staunch advocate of a fair living wage, investments in affordable housing, criminal justice reform, infrastructure improvements, expanded youth programs, and better educational opportunities.

He currently serves as a member of the powerful House Foreign Relations Committee, the House Committee on Education, and the Workforce and House Select Committee on Small Business.

On the House floor, he criticized Trump’s proposed Mexican border wall and introduced a bill that would ban the building of walls or fences on federal land near the border. In April, he co-sponsored a bill called “The Protecting Sensitive Locations Act” that would prohibit Immigration and Customs Enforcement (ICE) from conducting “arrests, interviews, searches or surveillance” at locations such as courthouses, bus stations, and funeral homes.