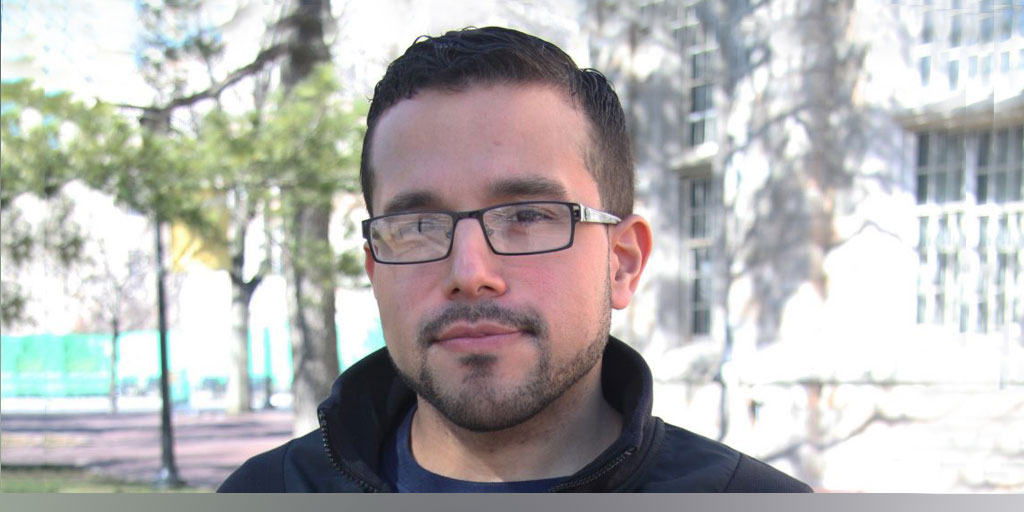 Senior Jason Burgos is this year’s recipient of the Elaine Rivera Scholarship, which is awarded to journalism students who are succeeding academically and have demonstrated strong storytelling skills. With his articles appearing in various online publications and his own podcast, Burgos is already ahead of the game in establishing his presence in the field.

Burgos returned to Lehman to pursue his undergraduate degree after a 10-year hiatus. His years of experience in the workforce infused him with the drive to succeed as a student and journalist. His efforts have paid off: He is a two-time Presidential Scholar and is on the Dean’s List. After six years as a part-time student, Burgos will graduate this spring. This semester, he is juggling a full-time academic schedule, while continuing to work his full-time job at the New York Botanical Garden and keeping up with his podcasting and freelance writing.

“Jason is a sharp writer and self-motivated reporter who has diligently worked to master journalistic practice and technical tools,” says Professor Christine McKenna, of the College’s Journalism, Communication, Theatre & Dance department. In turn, Burgos credits Professor McKenna with helping to develop his skills in audio software as well as web page development and design.

Burgos enjoys writing about Mixed Martial Arts (MMA), particularly Brazilian Jiu Jitsu. He has penned numerous articles on the sport for mmasucka.com, for which he serves as an editor. In an article for The Bronx Journal, titled “Grappling with Religion and Sport,” he profiled Brazilian Jiu-Jitsu competitors Yara and Nancy Helmy and how they balanced their religious choices with their athletic pursuits. His articles have also appeared in lastwordonsports.com and sportsandpolitics.org. Burgos launched his own podcasts, called Cheap Seats and The Stick Man, where he and guests discuss all things sports related.

As host of Cheap Seats, Burgos has conducted interviews with Ultimate Fighting Championship coaches, where they debate picks for upcoming matches and discuss other aspects of the sport. Recently, Burgos had the opportunity to report from press row at a Bellator MMA show in Connecticut. He had waited years for the moment.

The Elaine Rivera Scholarship was established in memory of Professor Elaine Rivera, who taught in the Journalism department and was a revered lecturer and mentor. “Elaine believed that journalism and social consciousness should work hand-in-hand to make a better, more equitable world for the most vulnerable,” said Rose Arce, co-coordinator of the scholarship. “She loved character-driven stories that gave voice to voiceless communities, investigative reporting, and unearthing the underpinnings of social crisis. Each of the scholars who honor her legacy is chosen for their commitment to that work.”