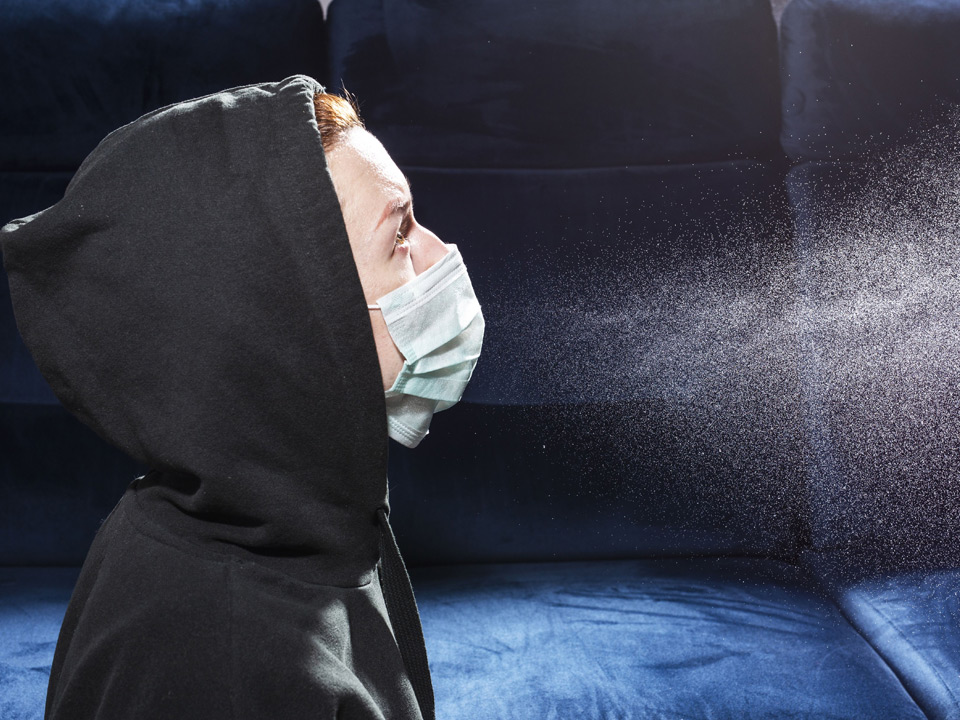 BRONX, N.Y., April 9, 2020 - As New Yorkers attempt to maintain the recommended 6 feet between themselves and other shoppers at the grocery store, two Lehman College physicists have found how a building’s ventilation systems could potentially circulate the virus through the air long after someone infected with it had walked away.

The study, co-written by Luis Anchordoqui and Eugene Chudnovsky, both professors and researchers at CUNY’s Graduate Center and Lehman College, was published March 30, on Cornell University’s arXiv open-source platform for scholarly articles in the STEM field. The paper was produced in response to national science agencies’ call to action prompting scientists to quickly produce research that can help inform efforts to end the pandemic and will be submitted for publication in the coming weeks.

The professor’s work was supported with funding by the U.S. National Science Foundation and the Department of Energy’s Science Office.

For their research, Anchordoqui and Chudnovsky used theoretical and computational techniques to determine the travel distance of airborne droplets which may contain coronavirus. Larger droplets (1-2 mm) will fall to the ground within 6 feet of the person who produces them.

“But the majority of the droplets are much smaller, remain suspended in the air and sometimes travel 20 to 40 feet because air flow is not calm but constantly moving,” which points to convection in the air being the primary mechanism of the spread of the infection, Chudnovsky said.

From the physics point of view, “we cannot find a good justification for a stationary 6-feet separation in a situation when people spend long times together in a room,” they wrote, illustrating the point using airflow streamlines.

In closed spaces with air-forced heating and air conditioning—like meeting rooms, office spaces, department stores and supermarkets—droplet particles containing the virus can circulate persistently via convection until evaporating, and in the aerosol form afterwards, creating the potential for infection to anyone inside closed public spaces, Chudnovsky said, noting convection patterns in a room are influenced by numerous factors.

“It depends on the location of air conditioners, radiators, windows, and all items in the room, as well as on people producing vortices by moving around,” they wrote. “The existing vortices in the air can make a location far away from the source of droplets more dangerous than the location 6 feet away.”

While their calculations show that a large number of droplets—produced whenever someone speaks, coughs, or sneezes—could turn into an aerosol before reaching the ground, the actual transmission of COVID-19, however, still depends on the infectious virus load carried by the droplets,” Anchordoqui said.

The professors’ findings about potential airborne infection via community spread could be useful in assessing the potential need for the mandatory use of protective masks.

“Obviously such a recommendation would have to come from public officials and epidemiology experts,” Anchordoqui said. “But If I had to go out to shop in public, I would wear a mask. I would recommend that to all my family. Doing that, I feel more secure.”

“The advice we hear is that only people who work in hospitals should wear masks, but there may be preventative value in having everyone cover their mouth to reduce the spread of droplets,” said Chudnovsky, a physics professor at Lehman for 32 years. “N95 masks are really important for protecting people in hospital settings where a lot of infections are going around, but other kinds of masks—even a scarf around the mouth—might be useful to the general public in reducing the spread of droplets into the air.”

New Jersey Governor Phil Murphy on Wednesday ordered all customers and workers at grocery stores to wear face masks and capped the number of shoppers a store could allow in at half its usual capacity.

“The next two weeks are extraordinarily important,” said U.S. Coronavirus Task Force Response Coordinator Deborah Birx at an April 4 briefing. “This is the moment to not be going to the grocery store, not be going to the pharmacy, but doing everything you can to keep your family and your friends safe.”

Because droplets can also contaminate surfaces, the physicists say their next study will focus on why the coronavirus can live for hours to days on surfaces like countertops and doorknobs.

According to another recent study, published in The New England Journal of Medicine, experimental data suggests that COVID-19 can survive up to three days on plastics, two days on stainless steel, 24 hours on cardboard, four hours on copper, and in the air for up to an hour.

“The question we would like to address next is why the apparent survival times on surfaces appears so much higher than in air,” Anchordoqui said.