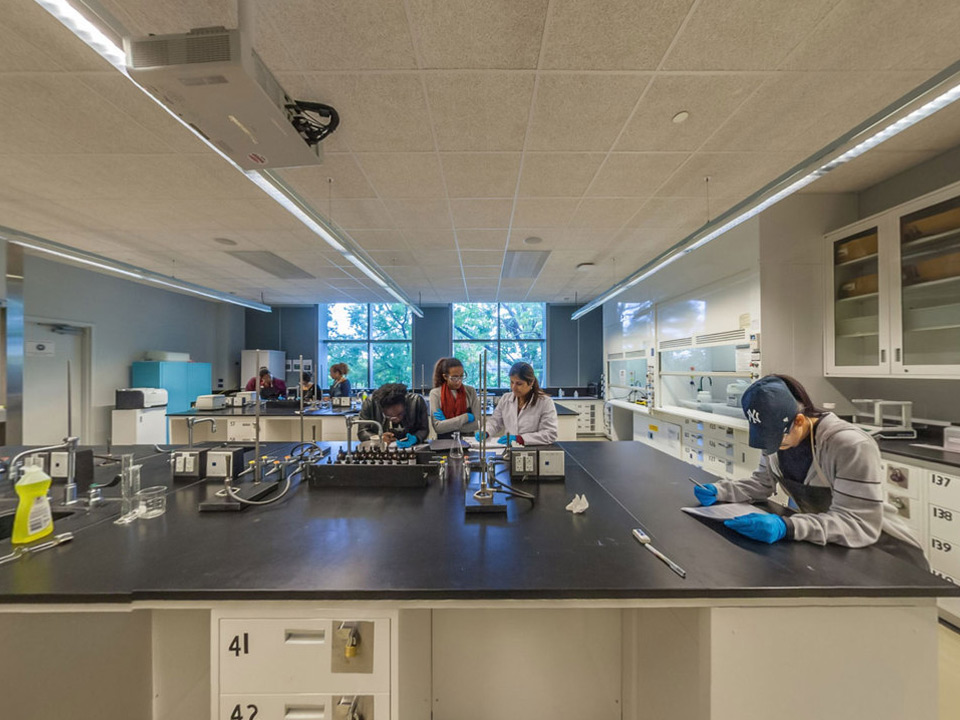 A new three-year grant from the National Science Foundation (NSF), totaling over $400,000, will establish Lehman College as a national site for undergraduate research in materials science, a discipline once referred to as metallurgy that incorporates physics, chemistry and engineering in the design and discovery of new materials. The award, made under the NSF’s Research Experiences for Undergraduates (REU) program, will allow Lehman chemistry professors Donna McGregor and Gustavo Lopez to create an innovative summer research program for students from across the United States, including Puerto Rico.

Originally scheduled to begin in late May, the coronavirus pandemic will delay the start of the 10-week Integrated Design of Materials in New York City program, or IDMinNYC, at Lehman.

“We are exploring a later start and end to the program,” McGregor said. “As of yet everything remains uncertain.”

Whenever the start date is scheduled, however, McGregor and Lopez are excited to launch a program that will not only shine a spotlight on materials science, but also offer opportunities specifically for women and minorities, groups historically underrepresented in the sciences.

The program will be repeated in 2021 and 2022, and may be extended with additional NSF funding.

McGregor and Lopez see IDMinNYC as an important recruiting tool for CUNY’s doctoral program in chemistry—and a way to make the research carried out at Lehman more well-known in the science community nationwide.

Until recently, there were few faculty members doing materials science research at Lehman; even now, said McGregor, there are “only a handful.”

“This puts us on the map as a science school,” said McGregor. “And for that we play with some of the biggest schools out there. So, in terms of stature, it’s a big deal.”

McGregor said that one of IDMinNYC’s strengths is the way the program dovetails with other REU and summer research programs in the city to offer supplemental activities, specialized facilities and a larger scientific community of student researchers.

“One of the most exciting things for me is that we’re working with people at City College and the Advanced Science Research Center (ASRC), so the students who are in the REU program will work in materials science either here at Lehman, in one of the labs in chemical engineering at City [College], or in one of the ASRC labs, which are really fancy and there’s a lot of nice state-of-the-art equipment,” McGregor said.

All participants will have an opportunity to work at each research site; in addition, they will attend twice-weekly seminars at Columbia University along with students in that institution’s summer program.

At the end of the 10-week program, students in all three programs will exhibit their work collectively at a joint poster presentation, said McGregor.

“It was a strategic move to do this in materials science with partners at City College,” said Lopez. These colleagues, who work in physics and engineering, will help expand the breadth of research opportunities—and career possibilities—available to REU participants.

Because the grant was awarded in February, McGregor and Lopez had a short lead time for program recruitment. For the first summer of the program, they targeted candidates at local community colleges and in Puerto Rico.

As part of the strategy to bring underrepresented students into a pipeline toward advanced study, IDMinNYC will continue extending recruitment efforts to community colleges.

“The community college students don’t really apply to REUs,” McGregor said. “They’re not discouraged to, but they’re not encouraged to, because they’re not on track towards Ph.D. programs. But a lot of those students come to the four-year colleges in CUNY and end up on that track if you get them early enough, so that’s what we’re hoping to do.”

IDMinNYC will provide the benefit of expanding local awareness of materials science research at Lehman college. In the past five years, the chemistry department has grown “exponentially,” said McGregor. But students don’t always make the connection between chemistry or materials science and increasingly attractive fields like bioengineering.

Although REU programs are primarily intended for students from external institutions, one space will be made available to a Lehman student each year.